Skip to content
Press Enter / Return to begin your search.

Chai is the word for tea in many parts of the world and is almost always served with milk. Masala means spice mixture. So technically, chai tea latte means milky tea milk and the first (and last) time I ordered a milky tea milk from Starbucks that is exactly what I got – steamed milk with about ¼ cup of what tasted like sweet cinnamon water. The taste was less than inspiring and made me realize what I wanted the world to know — REAL CHAI MASALA DOES NOT TASTE LIKE THAT! 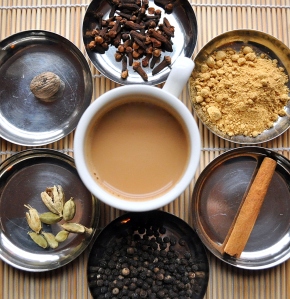 The oldest stories of masala chai (spiced tea) dates back thousands of years to Southeast Asia. According to ancient lore a king created it as a an Ayurvedic beverage for medicinal purposes to cleanse and restore the body. The British East India Company introduced black tea in India in 1834 and tea became part of the drink.

Chai produces a warming, soothing effect, acts a natural digestive aid. The spices are considered “Sattvic” or calming, vitalizing and mentally clarifying. Spices used very from region to region and each contains different vitamins and minerals that help improve circulation and immune function, increase mental clarity and enhance mood. A few are listed below:

Clove – Pain relieving and antiseptic. Like pepper and ginger, clove is also used to increase potency of other  herbs.

Fennel – One of the worlds healthiest foods. Excellent source of many vitamins and minerals including Vitamin C and potassium. Was found in royal gardens in medieval times and used to treat kidney problems and also laryngitis.

A good cuppa chai should be sweet enough but not too sweet with well-blended spices that have a smooth, not bitter, flavor that opens in a burst of cinnamon, cardamom, ginger, clove and fennel as it heads down your throat. You might even taste for a split second the pungency of black pepper or a tinge of nutmeg. Like dressing at Thanksgiving supper, everyone in India has their own opinions and recipes for what mixture of ingredients makes the best chai.

The recipe below has become a tried and true tradition in our house as the air thins and the cold weather comes. It’s so smooth and warming I’ve known hard core coffee drinkers to set down their cups and ask for chai masala at my table. Recently I knew my message was getting through when I heard one convert say, “Hey! This tastes nothing like the chai tea latte at Starbucks!”

Prepare the masala recipe first by grinding the spices together, then add other ingredients and boil. This is quite simple.

Grind these spices to a powder in a blender or coffee grinder and set aside.

In a medium saucepan, boil water, tea leaves, ¾ tsp of the masala powder and sugar. Mix well and let heat to almost boiling.

Milk: Any milk, dairy or non-dairy may be used.

Tea: Try with a tea of your choice like green tea, a rooibos, or tulsi basil.

Jane Baldwin found her purpose through her own wellness journey early in life, at the age of 28. She helps her clients achieve greater wellbeing and more engaged productivity by developing the skills of an unwinding mindset. As a consultant and speaker, she draws on her experience as a Maya archaeologist, a hospitality entrepreneur, an Ayurvedic chef, and two decades teaching yoga, mindfulness, and Harmonic Breathwork. She has worked with clients over a range of fields including healthcare, psychology, military personnel, creatives, and patients in the healing stage of their wellness journey. Jane is a certified yoga therapist with The International Association of Yoga Therapists and registered as a continuing education specialist with Yoga Alliance. She continues to work consistently with gifted teachers and mentors including Sally Kempton, David Elliot, and Tias and Surya Little of Prajna Yoga. She has an M.A. from New Mexico State University in Archaeology and B.A. from The University of Texas at Austin in Latin American Anthropology. With Jim Baldwin, she co-owned one of the first wellness retreat centers in North Texas, The Double J Hacienda & Art Ranch. Jane lives in Dallas. View all posts by jane arie baldwin